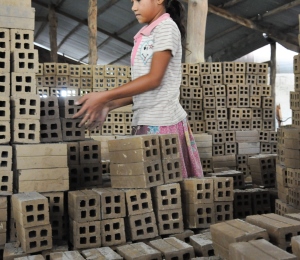 Today is recognized as World Day Against Trafficking in Persons – including the 5.5 million children in forced labor. However, the United States Congress has made the decision to zero out the account that funds programs that have effectively worked with partners to withdraw 1.7 million children from the worst forms of child labor, including trafficking.

85 million children are in dangerous, dirty, and degrading jobs that prevent them from attending school and are harmful to their physical, mental, and social development. Boys and girls work in many places they shouldn’t – including agriculture, mining, quarrying, fishing, factories, domestic work, and commercial sexual exploitation. 5.5 million children are in forced labor.

Child labor impacts a child’s health by exposing them to heavy loads, dangerous chemicals, heavy machinery, and poor working conditions. It robs children of the opportunity to receive an education.

The International Labor Affairs Bureau (ILAB) at the Department of Labor has worked for 10 years to reduce exploitative child labor through education. Since 1995 they have worked with partners to withdraw 1.7 million children from the worst forms of child labor, including trafficking.

In both the House and Senate Labor, Health and Human Services Appropriations bills, grant funding for ILAB has been zeroed out. Last year the office received about $59 million. The lack of funding for ILAB will leave children, who would have been helped through these programs, at risk for exploitation.

At a time when the U.S. is a leader in combating human trafficking, the U.S. should be preventing children from becoming vulnerable. Preventing and responding to child labor through community-based approaches can protect children from abuse, neglect, exploitation, and violence.

One of the most effective forms of advocacy to help restore this funding is to meet with your member of Congress in person.

In August, members will be home, and they want to know what issues are important to you. This is the perfect time to catch them before the budget is finalized this Fall.

Photo: Eleven-year-old Keota places bricks in a hot factory. She used to work to help her parents earn money to support the family. Now, thanks to programs such as those supported by ILAB, Keota is healthy, can focus on school, is an excellent student, and dreams of becoming a cosmetician – so she can be neat and clean all the time. © 2012 World Vision/ photo by Vichheka Sok