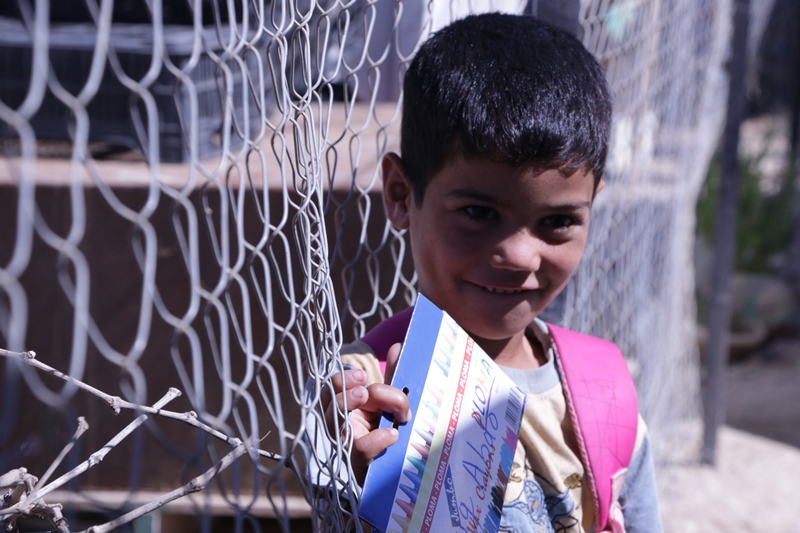 This story was originally published by World Vision International in December 2016.

For Kheir and Mhamad, school had a different meaning than it holds for many children. It was not just a place for education; it was a getaway, a place where they could live their childhood.

The alternative for Kheir, 5, was gathering plastic and nylon from the sides of the road and then selling them to the local buyers who are interested in recycling. As for Mhamad, 6, it was collecting potatoes from the field for hours and hours every day.

But thanks to determined parents and World Vision’s “Early Children Education” program, both boys were introduced to the world of education.

“He’s the only one in the family who stands the chance of having a good future. All of our hopes are pinned on Kheir,” said his mother Souraya, 37. None of his eight older siblings had the chance of receiving schooling, neither in Syria nor in Lebanon. Kheir comes from a big family. His father remarried and had children from his second wife. He no longer supported Souraya’s children, who are all minors, especially after both families fled to Lebanon from Aleppo in 2011.

Souraya heard about World Vision’s “Early Children Education” program, which is based on activities that give vulnerable children the opportunity to be successful in life. It develops their skills and hobbies through a curriculum for children ages 3 to 6 that includes learning letters, sounds, colors, songs, and numbers. The classes take place in seven different informal tented settlements in the Bekaa area. Souraya registered Kheir, as he was within the correct age range. But Kheir’s older brothers had to gather plastic and sell it in order for their family to survive. They often asked Kheir for his assistance in certain neighborhoods.

“He begs me to go to school instead of work, because he likes it there more,” said Souraya.

“I make $7 on most days. I use it to buy bread and water for my family,” said Kheir, who has asked his brothers if he can work with them after school, so he doesn’t miss classes.

“It isn’t just about food,” Souraya interrupted, “ Kheir stopped being violent with other children. He cares more about his personal hygiene and nothing makes him happy like getting good remarks from his teachers. ”

“The school is like a sanctuary to him and I encourage that,” said Souraya.

Mhamad’s situation is slightly different. The scope of his work requires waking up by dawn and heading early to the grasslands to collect the potatoes, which also meant skipping school on some days. Even though there were afternoon classes, he generally came back from the grasslands exhausted and suffering from back pain.

Mhamad’s mother Zahiya, 40, believes that the family has no choice but for Mhamad to be helping out his two older brothers. In a family of three boys and three girls, the boys felt responsible for maintaining a financial income after their father suffered a stroke a year ago, leaving him very ill and unable to work. The family escaped the war in the countryside of Aleppo in 2012; however, their father was supporting them by working in the agricultural field in Lebanon.

Although everything changed for the boys, school kept Mhamad from losing his joy.

“A series of events, from the brutality of the war to his father’s illness, traumatized Mhamad,” Zahiya said. “However, I truly believe that the games he plays at school and the songs he learns put an end to his nightmares. My son has so much peace in him now.”

Both Souraya and Zahiya appreciated the constant care of the World Vision staff at the education center for Kheir and Mhamad. “They visit our tent every time Mhamad skips school and emphasize the importance of his daily attendance,” said Zahiya.

When this story was first published in 2016, World Vision offered an academic home, over a period of four months, for 748 Syrian refugee children. Kheir and Mohamad were not the only ones suffering from child labor: 20 of their 165 classmates at the center had at some point been forced to work, beg on the streets, or even steal. Nevertheless, with education, these children now stand the chance of experiencing a peaceful childhood and a promising future.