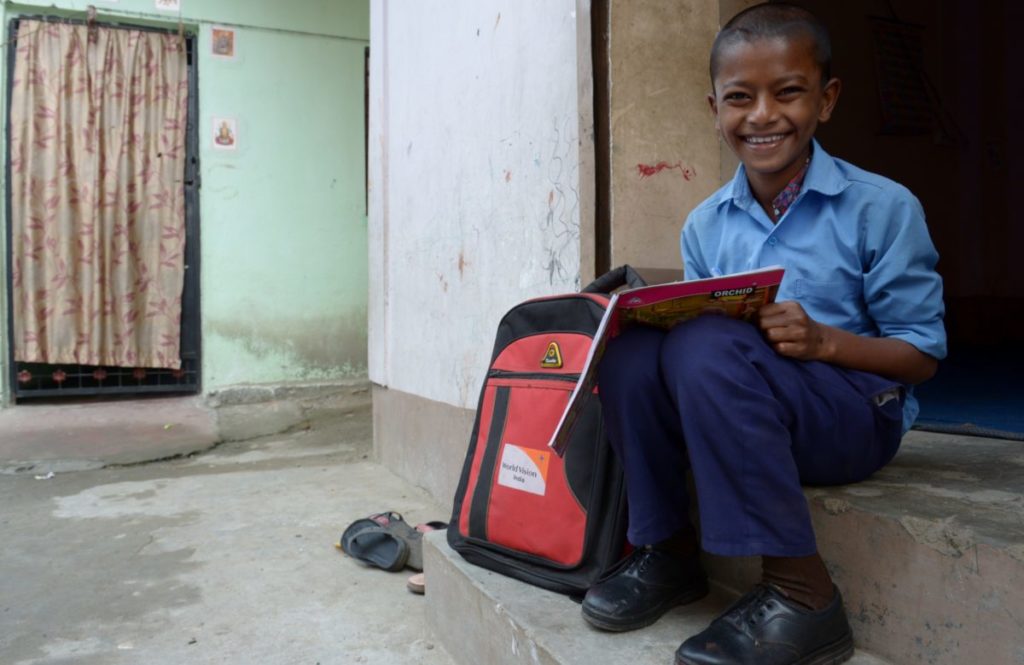 This is part two of a four-part series taking a deeper dive into child protection efforts in India. A group of concerned volunteers known as the child protection unit works together to protect children from child labor, child marriage, and child trafficking through education.

Whether it is because of where they were born, their gender, or the need for their family to migrate, every day 4.5 million children in India under 14 years old are working across the country to earn a living.

Children accompanied with parents stroll by Sandeep and Santosh. A sound bite of conversation on results and next grade proceedings fill the air.

“My son cleared his fourth-grade exams and now he is in fifth grade,” Raju says. A beaming smile — sign of a good result — radiates across Raman’s face.

Excited by what he has heard, Santosh requests to see the report card. Congratulating Raman and motivating him to study hard, Santosh bids them goodbye and moves on with Sandeep.

Santosh sheds light on the environment that increases the vulnerability of children while elaborating on the conditions prevailing in the community.

A settlement of migrants, the colony derives its identity from its distinctive location. The residents constitute a part of the city’s vast unskilled labor force and live clumped between the Siliguri train tracks on one side and the national highway on the other. Tugged between the insatiable demands of an expanding economy and the gripping desperation of the economically weak, children’s well-being is often compromised, making girls and boys collateral damage.

After its inception, the Child Protection Unit was given the herculean task of safeguarding the rights of children, starting with the right to development.

“Children often accompanied their parents to work, either rag picking or selling vegetables,” says Santosh. “Ninety-five percent of the children didn’t attend school. World Vision opened a non-formal education (NFE) and remedial class center for such children to get a chance at living a better life away from counterproductive habits and practices. Initially, we found it difficult to get parents to send their children to classes because earning money was their priority and the children were not used to a disciplined regime of sitting in one place and studying. To initiate their first step towards education, World Vision gave children education kits like school bags, books, and stationery. The numbers of children started increasing.”

Raman is one of them. He used to go with his father to sell vegetables. “After attending the NFE center we enrolled him in school. Over 50 percent of the children are now regularly going to school,” says Santosh.

From learning how to hold a pen to enrolling into a formal school system, 793 children in Siliguri successfully transitioned from a bleak sinister world into one of vivid hope.

“The changes among the children are evident,” says Sandeep. “Leadership skills are emerging in them. Before, children followed their parents to work [and never left that situation]. Today, the children can guide their illiterate parents, which has led to a decrease in child labor and child marriage cases. Now we have a generation of leadership in place to ensure that the child protection mechanisms work smoothly in the communities.”