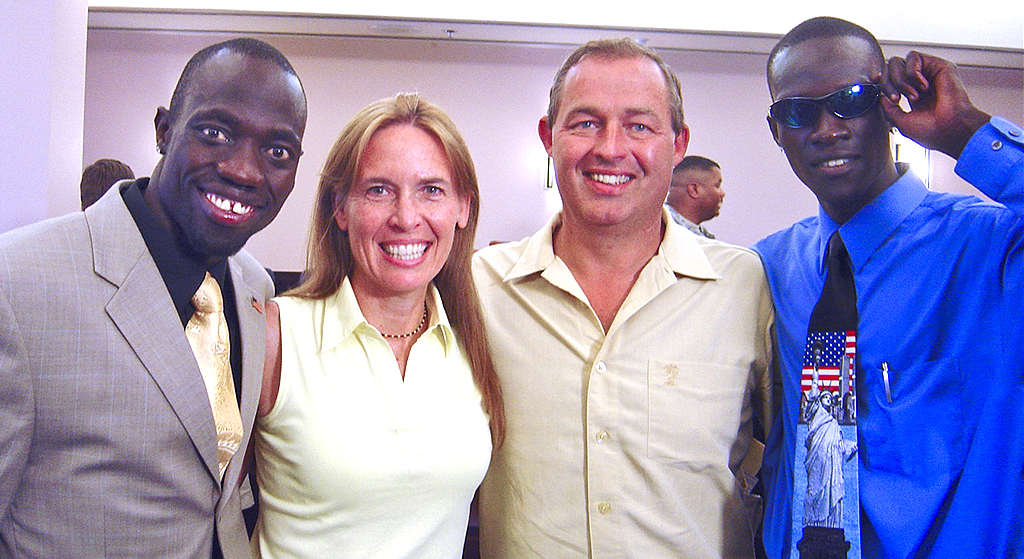 Lopez Lomong, a U.S. Olympic athlete, was ripped away from his parents by rebel soldiers at the age of 6 in South Sudan. After his kidnapping, Lopez was taken to a camp where boys were forced to become rebel soldiers, killing other people, or dying themselves.

From there, a series of miracles occurred. Lopez was befriended by three older boys in the camp, who rescued him and fled the camp on foot at night. After running for three days and nights, the boys found themselves at a refugee camp in Kenya.

Lopez lived there for the next 10 years, dreaming of what else life might hold and growing closer to God each day. He prayed that one day he would be able to leave the refugee camp and find a new life. His prayers were answered when a family in the United States near Syracuse, New York, decided to adopt him as their own.

It was only a short time that Lopez had been in the U.S. when the 9/11 terrorist attacks occurred. As his new home was under attack, Lopez struggled to reconcile the haunting memories of wars and violence in Sudan with the expectations of new life and safety in America.

I sat and watched the television. Smoke and dust covered New York City. I was scared. This looked worse than anything I’d heard about in Sudan. The home phone rang almost nonstop.

Another plane crashed, this time in Pennsylvania. The news anchors said the White House might be the next target. I could not keep watching. I turned off the television and went outside to wait for Mom and Dad to come home.

Images of people fleeing New York on foot across the bridges felt far too familiar. I had to get away from it.

Mom and Dad arrived a short time later. Both were visibly shaken. I sensed that they, too, were very afraid. Mom hugged me and asked, “Are you okay?”

“Yes,” I lied. My new country, my home, had been attacked. I had no idea where New York was. For all I knew, the World Trade Center and the Pentagon could be nearby. Earlier, I saw planes flying overhead, which made me wonder if Syracuse might be attacked next.

We went inside. Dad turned on the television. I did not want to watch. I’d experienced war. Watching the start of another did not appeal to me. But I did not say anything. Instead, I sat on the couch and watched with Mom and Dad.

A newscast showed a scene from the other side of the world in which people celebrated. Al-Qaeda claimed responsibility. I recognized that name. They had ties back to the people who bombed villages in South Sudan.

I felt like I was back there again. Every time we saw a fighter jet in Kimotong, we ran to a cave for shelter. I didn’t know where to run here. Maybe we didn’t have places to hide. What were we to do when planes attacked us?

Dad could tell I was afraid. “You know you are safe here, no matter what you see on television,” he said.

“We don’t know where all of this will lead,” Mom added, “but it will never be like it was in Africa. This is an isolated attack. You don’t have to worry about an attack around here.”

“I understand, ” I said. I watched them closely. Their actions matched their words. Yes, they were upset by the attacks, but they had a strength about them that told me everything would be okay.

We watched the news for a little while longer. After a while, I announced, “I’m tired. I think I will go to bed.”

Mom and Dad both hugged me goodnight. I went upstairs and climbed into my bed. As bad as this day had been, it was very different from the war back home. Lying there in the dark, listening to the television downstairs, I knew that in spite of everything I’d seen and heard that day, I was safe.

However, my illusions about America being a land of peace were shattered. Bad people are everywhere. Unfortunately, that is a part of life wherever you live.

Over the next few days, I discovered how different America was from Sudan. Back home, we had to run and hide. We didn’t have a way to stand up and fight. Then, I saw President Bush on television, standing in the midst of the carnage in New York, a bullhorn in his hand. Rescue workers stood all around him.

I could hardly understand anything he said, but the image of him standing there was the most powerful thing I’d ever seen. He inspired me more than words can describe. Watching him there, I knew I was safe.

The next day, when I went to school, a table was set up in front selling t-shirts. I picked one up. Across the front were the words “United We Stand” with an American flag in the background. I bought one. Everyone in the school bought one. We all wore them the rest of the week.

This was another change for me. I realized the American people love their country, and more importantly, are extremely proud of it. I had never been proud to live in Sudan.

I never knew it was possible to be proud of a country. I was proud of our community, and I was especially proud of my mother and father and all their hard work to provide for us kids. I always walked with my back straight and proud when I walked with my father to our cattle.

But I had never been proud of my country.

Now, I was. I would not become a citizen of the United States until 2007 — which was the earliest I could — but after September 11, I was an American. The terrorist attacks had bonded the country together and made me a part of it as well.

This new place was now my home, a home I loved and was proud of, a home I hoped to represent someday— and make my home proud of me as well.

Want to read more of Lopez Lomong’s story? Check out Lopez Lomong’s childhood story of terror on the World Vision blog or his book, “Running for my Life.”

Photo: Lopez Lomong accompanied by his mother, father, and his brother Dominic as he proudly receives his US Citizenship. (Photo Courtesy of Lopez Lomong.)