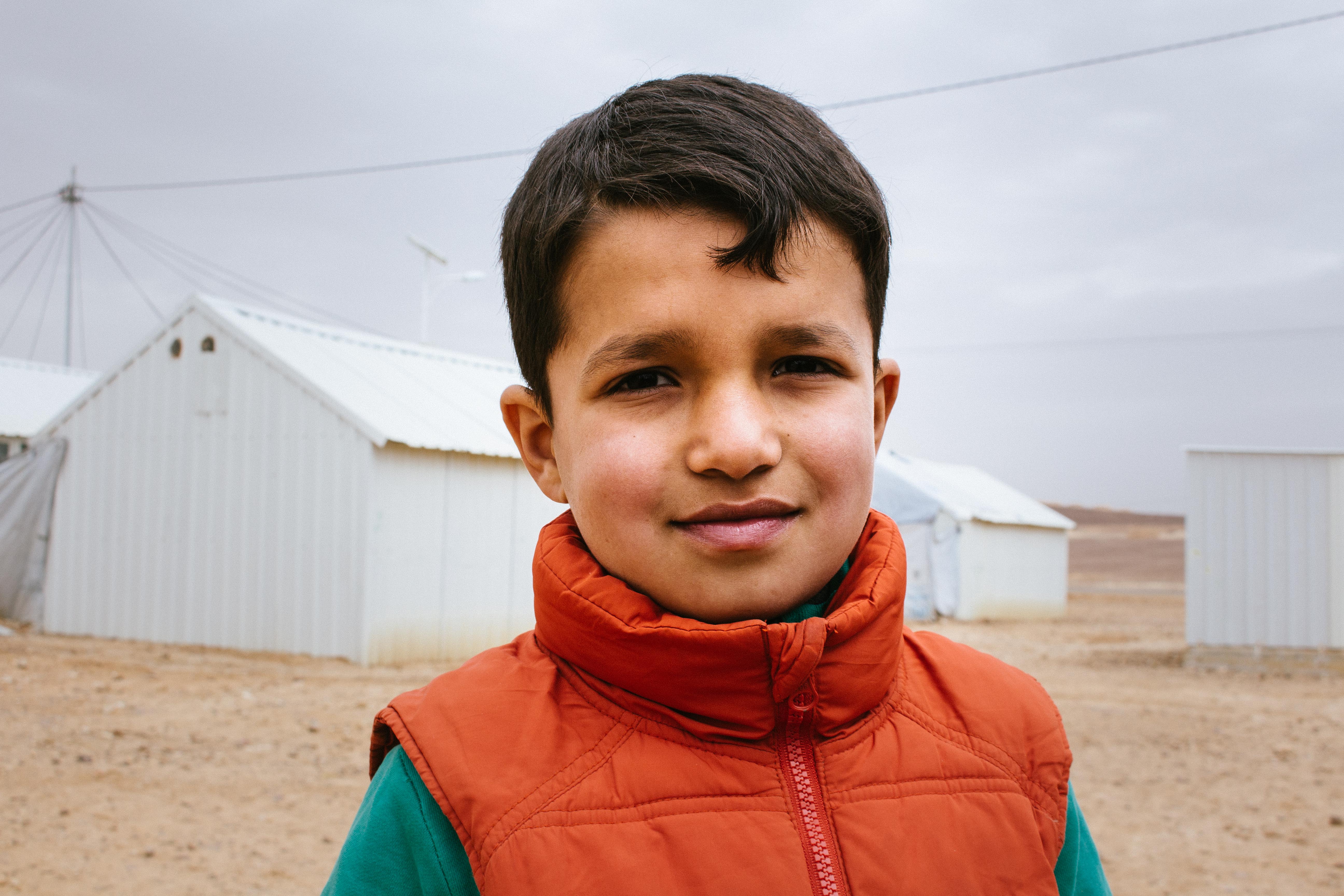 It was 37 degrees Celsius in Azraq the day I visited. Thirty-seven degrees—or 98 degrees Fahrenheit—is a normal day in Azraq, one of Jordan’s largest camps for Syrian refugees. Azraq camp is in an inhospitable desert about two hours outside the Jordanian capital of Amman. Vegetation is next to non-existent, and the nearest settlement of any consequence is more than 30 minutes away by car.

As I drove to Azraq through the desert, I empathized with the hundreds of thousands of Syrians forced to flee across this terrain — often on foot — for days before finding refuge in Jordan. What must it have been like crossing this expanse with your children and family members and all the possessions you could carry with you as you ran from a home that was no longer safe? As we drove, the camp appeared on the horizon like a mirage, with the sun reflecting off the countless rows and rows of United Nations-built, white corrugated metal “houses” that more than 45,000 Syrian refugees now call home.

I was with a small group of World Vision staff visiting the camp in late May — right in the middle of Ramadan, the 40-day fasting period in the Islamic faith where adherents don’t eat or drink anything between sunrise and sunset. Our purpose was two-fold: to visit the site of World Vision’s Early Childhood Education program, which provides education and psychosocial support to more than 300 4- and 5-year-old refugee children each year, and to gain a better understanding of the needs and challenges of the people living in Azraq.

In the education center, I was struck by how the center seemed to glow with life. As the children ran to line up for daily commencement, staff and volunteers prepared for the day’s lessons. In a garden just inside the grounds of the center, there was a small tree — the only one I saw in Azraq.

One of our staff members mentioned that many of these children had never seen their homeland. They were born here in the camp hospital, and for them, this metal city is the only home they’ve ever known. As the children lined up to start the school day, the Jordanian anthem began to play from a loudspeaker, and these 4- and 5-year-old children of Syria dutifully sang along. At that moment I was suddenly overwhelmed with the weight of what I was witnessing: These boys and girls of Syria — who never knew their homeland — singing the anthem of a land not their own. Developmentally, at a time in when children begin forming their social identity — answering the questions “Who am I?” and “Where do I belong?”— these children were growing up as “children of the camp.”

Afterward, I spent time connecting with two families about life in the camp, their thoughts about the future, and the challenges they faced. We sat on the floor in one-room houses and listened to stories about life before the war in Syria — how a man had built his grocery business over three decades, only to watch it be destroyed in a bombing attack. Finding work was difficult, they said, and jobs within the camp rotated every three months so that each man had an opportunity. While both families noted that their basic needs were provided for, there was little hope for a future beyond a simple existence in the camp.

“They used to talk daily about all they would do when they returned home to Syria,” a World Vision staff member in the camp told us. “They used to tell their children stories to keep their hope for returning home alive.” But as the Syrian conflict continues into its seventh year, “They don’t talk like that anymore,” he said.

Next: How to pray for refugees around the world.

Stay informed about poverty and justice issues around the world: