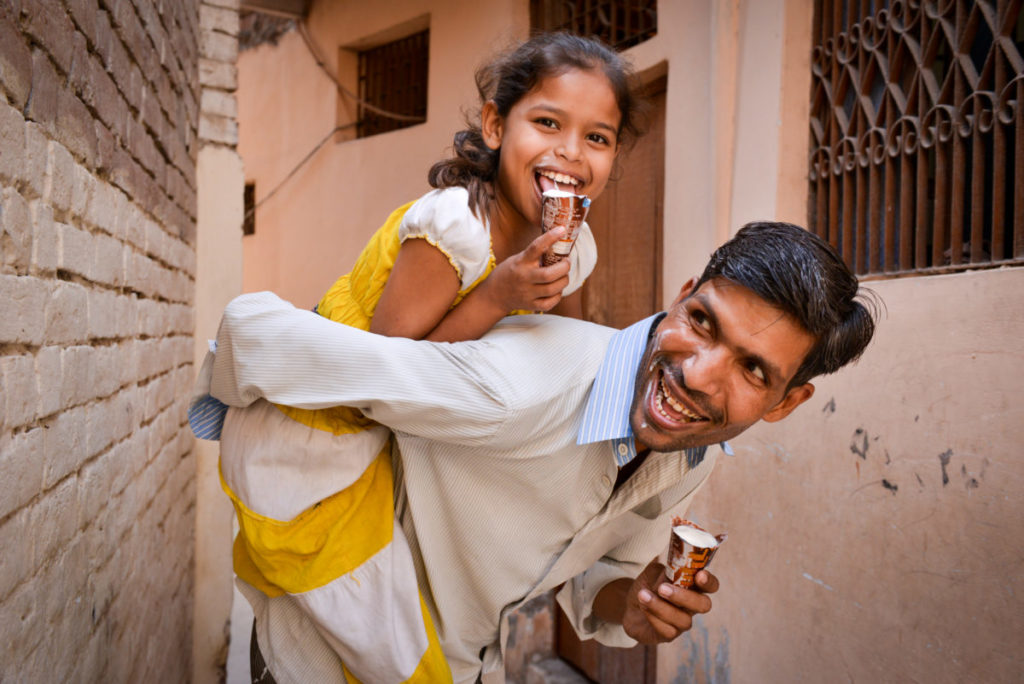 Today, we continue to celebrate fathers by sharing a story from India. Men are playing a critical role in ending child marriage and helping the community realize that girls are to be valued, given opportunities for education, and a chance to thrive.

According to the 2014 UNICEF report, Ending Child Marriage Progress and Prospects, child marriage is most common in South Asia and sub-Saharan Africa. South Asia is home to almost half (42 percent) of all child brides worldwide; India alone accounts for one-third (33 percent) of the global total. The report further states that India is on the list of the 10 countries with the highest rates of child marriage (58 percent). However, a group of men in India have come together to work and change these statistics and the way their culture thinks about girls.

Whispers cut through the mellow chirping of birds and the soothing whoosh of the wind, under the restful shade of the neem tree, where community men gather for their routine Men Care Group meeting in the outskirts of rustic Agra, Uttar Pradesh state.

“Another case,” says a member of the men’s self-help group, rubbing his forehead repeatedly. Men exchanging guarded glares signal the horror of the new predicament.

“It’s similar to Lalit’s daughter’s case, but this time it’s a widowed mother making the decision,” says another member, sheepishly.

Abruptly ending conversations of planning for the next meeting, Jitender, the leader, reels in the sideline murmurs.

“I and a few men from the group will inquire about this family and the decision taken to marry their teen daughter. As we intervened in Lalit’s daughter’s case, we will speak to the mother of the girl and counsel her.”

Redirecting the men’s attention to the meeting, Jitender continues to explain the purpose and aim of the Men Care Group in detail to the newest members before dispersing the crowd.

“The main reason we considered her marriage was because she was to get married in the same family as my older daughter, so I had to pay dowry only once. We are poor people we can’t afford it. Where can I get that sum of money from?” says Lalit in a fluctuating pitch.

“This custom of dowry has been prevalent from generations, and we being the girl’s family have to give, no questions asked. We have to give in cash and kind like TV, coolers, and utensils. The society dictates, and we have to obey. If we don’t give then the family is ridiculed and shamed and made to feel guilty. The family is talked about; it’s like being ostracized and cornered. The girl is then mentally tormented. This could also turn to physical abuse like hitting and beating them,” the father says.

Society’s skewed understanding of a girl’s worth — merely as a profit and loss venture — temporarily blinded Lalit’s vision and overcame his ability to see the catastrophic consequences his decision to marry her early would have on his precious daughter.

“At a World Vision program for adolescent girls one of the girl’s group members told me about Lalit’s daughter,” says Jitender, a leader of the Men Care Group. ”Our group decided to go and counsel and advise the parents, especially the father. We explained to them that girls in early and mid teens are still growing. If the girl marries at a young age it would make her prone to various illnesses [at childbirth] that could lead to serious health complications. She will be weak, and the child will also be weak. The girl herself is a child, how can you expect her to take care of a small child? The parents and then the elders of the family understood this, and it was explained to the in-laws too. They agreed to wait for the girl to be of a marriageable age. We also told them that they should educate their son and this is not the time to make him work and start a family.”

Metamorphosis of the Mind

Formerly part of the same mob ideology ‘girls are someone else’s property;’ Mangay Lal knows all too well the flawed conditioning of mindsets toward girls and women.

“From childhood we have been pointed towards an orange and told that this is an apple. For a long time we believed that the orange was an apple. But in reality an apple is an apple and an orange an orange. Similarly we have been made to believe, by society, that a girl is someone else’s property and will marry and ultimately go to someone else’s house, so why should we invest in educating her, we don’t benefit from it,” says Mangay Lal a Men Care Group member, glancing at his daughter distantly playing in a corner.

He continues, “But if we invest in the boy, he lives with us and he would be our support during old age. Girls if educated can bring a wind of change in the household she goes to and bring happiness there. We don’t think this way, society doesn’t think this way. They blindly follow the traditions set by ancestors, like once the girl turns 14 get her married. Not understanding the ill effects of child marriage leading to health problems. The in-laws treat the new bride as a maid and expect her to do all the sweeping, swabbing, dishes, cooking, washing etc. Everything is thrust on her shoulders like construction material thrust on a donkey.”

Suppressed, victimized and abused, women often fall prey to the ferocious assault of a patriarchal society.

Deep rooted in societal norms, her fate is predetermined before she is born. Perceived as “Paraya Dhan” (someone else’s property) and not as ‘Daddy’s little girl,’ contaminates the equitable outlook towards girls and women.

“[The lack of] Women’s safety is a deep rooted problem embedded in their patriarchal mold. Only focusing on women cannot solve it. It is necessary to bring in men’s focus to address gender-based violence — a large part of the problem. It is important to facilitate the provision of a safe and constructive space for men to reflect on and redefine what it means to be men and fathers to ensure the safety of women and girl children,” says Karoline Davis, head of gender and development, World Vision India.

Being part of the Men Care Group sparked a chain reaction of transformation in Mangay and his fellow members. Mangay Lal’s focus shifts to his daughter as she runs towards him.

Mahima, rapidly consuming the ice cream cone before it melts in the blistering heat of the summer sun, gradually raises her head, mischeviously looking at her dad, who sits beside her eating his share.

In a flash, she tilts her ice cream, smearing her father’s face with melted vanilla. Reciprocating his daughter’s gesture Mangay dabs a dot of vanilla on Mahima’s nose. Both burst into fits of laughter.

“I love my daddy. He listens to me and brings me treats. He is my friend,” says Mahima.

“I never saw myself as having a friend type relationship with my children, especially my daughter. There was no concept of taking the children out for leisure. No one did it in our community. With regard to caring for our children, earlier there was no desire in me to bring about change. I never considered about what they were eating, wearing, or playing. I used to take pride in my role as a man. I work and get the money into the house, and that’s all. The rest was not my concern. But being part of the Men Care Group has opened my eyes.”

“Through exposure visits and meetings, organized by World Vision, I learned what is the right thing to do and what is not. The right thing is to love your family, your children, motivate the children to move forward in life, and not to succumb to societal pressure and make wrong decisions that would be detrimental,” says Mangay Lal.

Members of the Men Care group were sensitized on how gender inequality impacts relationships and on gender-based violence. They were encouraged to take active part alongside their wives, mothers, and sisters in caring for the home. The concept of savings was introduced that could be used for the development of the community and its members. The group progressively altered the male-prejudice of its members into empathetic, caregiving souls.

“Men, being the head of the family play a significant role in the community and, hence, it is important for them to understand gender disparity. The Men Care Group is important because it helps men to understand themselves, their spouses, children — specifically their daughters. They confessed that many of their practices, like child marriage, are followed as tradition. We promoted healthier coping mechanisms and encouraged a will to resist chewing tobacco and alcohol consumption. Such groups and trainings enable them to break free from the chains of traditionalism and derive direction for their own development and the development of the community,” says Feba, gender and development coordinator, World Vision India.

“This group allows us to bond and talk to men, where we can share our problems. The education about gender disparity was important for us to exterminate the bug of discrimination from our minds. We are empowered about our rights and this helps us do better community development. Many of our members have quit bad habits. Promod stopped eating tobacco. It’s been 6 months since Vishambhar stopped drinking. We encourage healthy living habits among one another. Now we are equipped to be better husbands, better fathers, and responsible citizens,” says Rajkumar a World Vision volunteer and a leader of a Men Care Group started by World Vision.

Addressing a follow-up group meeting, Promod recites the words of his self-composed poem, passing on the baton of gender enlightenment to his fellow group members:

“World Vision came, they saw the darkness we were living in, they asked us to come to the light, and that light is with help of our understanding or our intellect creating a healthy environment where we care for our families and community and where our children especially girls can study; not to come under the pressure of society, which is ignorant, but to rise above and to empower others,” says Mangay Lal.

Photo: Mangay Lal, a member of the Men Care Group, connects with his daughter. He learned that he could relate to his children as friends. ©2014 World Vision/ photo by Annila Harris