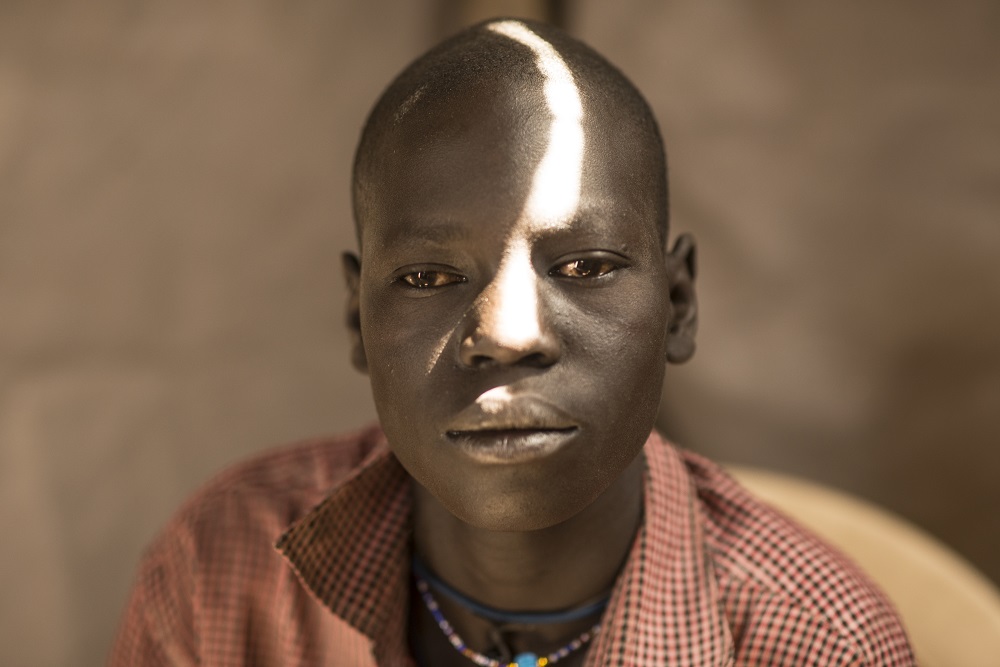 By Melany Markham and Jessica Bousquette

Jeremiah* (14 at the time of the interview, now 15) lives with his mother in a settlement for people who have fled places in South Sudan that were besieged by violence over a year ago. When conflict first broke out, in December 2013, Jeremiah’s older brother Jat (17) joined the army. Since then, he has seen his brother once.

Jeremiah lives in Upper Nile State in a community where over half of the residents have only lived since the conflict started. In his community, even the most basic education is reserved for an elite few. The cost of school fees and a uniform make it out of reach for most families, including Jeremiah’s, so he hasn’t been to school since he arrived.

Jeremiah’s parents don’t live together. He lives with his mother in a settlement for others who fled violence, while his father, a fisherman, lives in the town. Yesterday, Jeremiah visited him, and they will go fishing together. Mostly, Jeremiah fills his days by gardening with his uncle and playing soccer with his friends.

But there is pressure on him to join the army, and the women in his village think that he inevitably will. When you ask Jeremiah, his answer is simple, “If I run out of food, I will go.” When faced with the choice between becoming a soldier or starving, it’s a simple decision.

After visiting his father, the happiness on Jeremiah’s face made it obvious that the meeting held a lot of hope. If his father teaches him to fish then he may have a choice not to pick up a gun in order to feed himself.

As violence has continued in South Sudan, the number of children associated with armed groups has continued to increase as have the number of children facing starvation. Currently, at least 16,000 children are associated with armed conflict, a 75 percent increase since April 2014. An estimated 686,000 children under 5 are malnourished—237,000 of them suffering acute malnutrition, and 34 percent of the population is severely food insecure.

Today as we observe Red Hand Day, a day to raise awareness about the use of child soldiers, half of the nearly 60 million displaced people around the world are children. They, like Jeremiah, face risk of abuse, hunger, neglect, exploitation, and other forms of violence as they are separated from their parents or caregivers, as they run out of options for livelihoods and survival, or as education is interrupted by disaster or conflict.

Though the needs and challenges may seem immense, there is hope and there are solutions. We know that supporting caregivers and parents with livelihoods and positive parenting skills helps protect children and families. Safe, free, and accessible school can provide an alternative to child labor and promote a bright future for children.

Today we remember that we still have a long way to go in protecting children, commit ourselves to continuing our efforts, and pray for children affected by conflict.

“Lord, we pray for children associated with armed groups and those at risk of recruitment. We pray that You would protect them and provide opportunities to leave and receive support. We pray for families and children caught up in conflict and ask for Your constant presence and protection. We pray, Lord, that You would move us to action to protect the most vulnerable. Amen.”

* Name changed to protect identity, this interview was conducted in Spring 2015.