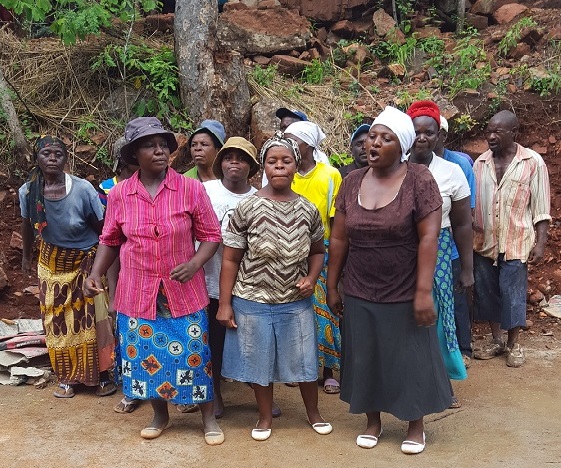 After a long, bumpy, and dusty ride, our caravan of vehicles had arrived in the rural district of Chimanimani in the southeastern part of Zimbabwe.

As we exited our cars and walked up the steep hill, we began to hear the inviting sound of men and women singing. They had just taken a break from their work constructing a local dam, as part of a development approach known as “Food-for-Assets” which works with communities to create irrigation schemes and other infrastructure that helps improve the community’s long term food security.

This project is part of the USAID supported ENSURE program implemented by World Vision and other partners. In the Shinja ward where the dam is being built, this region is known to receive low and erratic rainfalls and it is often affected by drought, made worse by this year’s powerful El Nino. Further, 80 percent of the Zimbabwean population is dependent on rain-fed agriculture for their livelihoods, making communities reliant on irrigation schemes for crop production as well as livestock production.

The encouraging news is that Shinja has rich, fertile soils conducive for crop production, so with the addition of this dam, the community will be able to build a critically needed asset in their community, and with the water collected in the dam’s basin, they will be better able to irrigate their crops and care for their livestock in the future. In exchange for their labor, they receive remuneration in the form of sorghum which supports participants in accessing food for their families during this time of scarce resources and low performing crops. To ensure sustainability, the community has also been trained in disaster risk reduction and formed various subcommittees which includes a watershed management group. As a result of this subcommittees’ efforts, participants collectively decide on various public works projects which has included construction of the dam.

As I listened to the singing of this community, one could hear the following words: “We thank you ENSURE, Enhancing Nutrition, Stepping up Resilience, and Enterprise…. USAID and World Vision.” The community sang this stanza over and over, and with their energetic melody serving as a backdrop, I turned and looked over at the dam half way complete in its construction. I saw one group of workers carrying large and heavy rocks used for the dam wall while another crew mixed cement. I began to witness the physical demands of the project, as well as the strong work ethic of this particular community. I am hopeful that as a result of their commitment and determination, the dam’s completion will bring forth a more food secure, economically prosperous community.

Ending hunger in our lifetimes might also seem like a challenging, perhaps at times insurmountable task. Yet, many parallels can be drawn between the resolve of the Shinja community and our own efforts in addressing food insecurity and malnutrition. If we as advocates remain equally engaged, we can do our part in ensuring that critical food security and livelihood programs like ENSURE remain robustly supported by USAID.

ENSURE is successful because it focuses on increasing household income through improved agriculture production, promoting nutrition interventions for women and children, and increasing resilience to food insecurity. These practices found in the Food for Peace supported ENSURE program are also being promoted in current legislation before the U.S. Congress, known as the Global Food Security Act.

Please consider taking the time to contact your Member of Congress to express your support for H.R. 1567/S. 1252, which if signed into law will continue to empower farmers and families to build more food secure and prosperous futures for themselves and their communities.