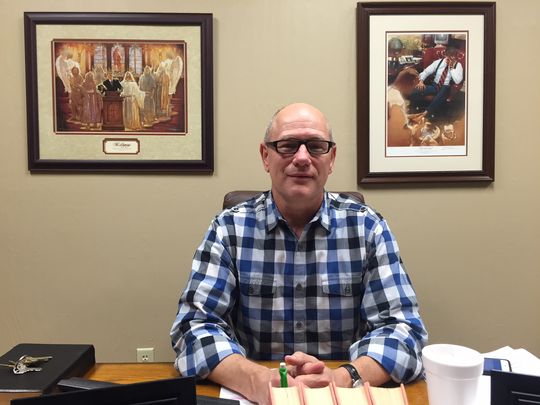 Pastor David Johnson of Christ Community Church in Mountain Home, Arkansas went on a trip to Kenya with World Vision in 2015. He came back advocating stronger than ever for people who live in poverty around the world. In this article, originally posted on The Baxter Bulletin, Johnson talks about his experience in Kenya and why he believes that foreign assistance matters.

When David Johnson and other faith leaders from around the country traveled to Washington D.C. last month, Johnson was there because of the Kenyans he’s met.

Johnson, the pastor of Christ Community Church in Mountain Home, was one of about 50 faith leaders from around the country who descended on the nation’s capital on March 1 and 2 as part of an annual trip sponsored by the Interfaith Working Group on Foreign Assistance. The group, formed in April 2013, advocates “for robust funding of humanitarian and poverty-focused development assistance.”

Johnson met in person with Arkansas Senators Tom Cotton and John Boozman, as well as Rep. Rick Crawford. His comments to them, he said, were informed by the five trips to Kenya he’s taken since 2003.

“The people — I can only speak for the Kenyans — they do not want a handout, they want a hand up,” Johnson said, “And I told our senators that.”

The average American, Johnson noted, overestimates the portion of the federal budget that goes to foreign aid. In a December poll conducted by the Kaiser Family Foundation, the average respondent estimated that 26 percent went toward assisting other countries. The actual figure is less than 1 percent, although that still corresponds to billions of dollars.

For those who might say that money could be better spent a home, Johnson said he doesn’t see that as an option.

Johnson said that, while in Kenya, he was amazed at how much a relatively small amount of aid could accomplish. Home health workers who taught pregnant mothers about nutrition, breastfeeding, immunizations and other vital info were paid about $10 a month, he said, while serving some 50 households.

“When you see firsthand the need, you know you’re advocating for real people,” he said.

To view the full article on The Baxter Bulletin click here.