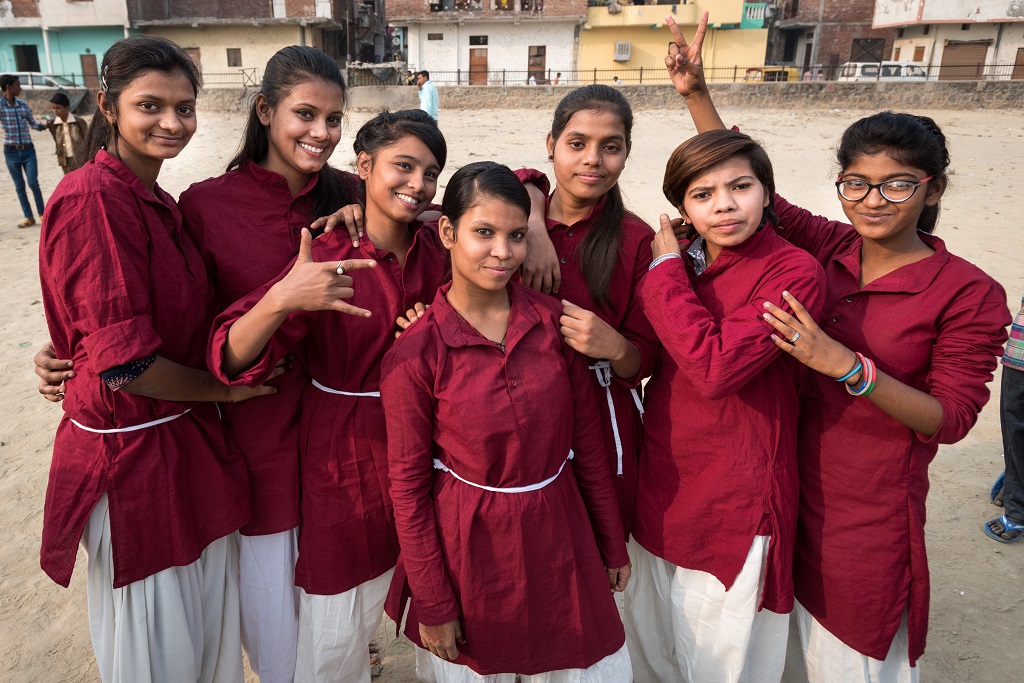 Harassment is one of many challenges girls and women face in Delhi, a sprawling city of 25 million people where there are problems of safety, vulnerability to violence and exploitation, pollution, and unsanitary or overcrowded living conditions. But empowered by sponsorship, girls in one neighborhood are overcoming poverty and trading child marriage for college textbooks. Learn about World Vision’s partnership with the Delhi police to provide 250 girls with the opportunity to take self-defense courses where they learned techniques to escape physical assault and the tools to confront and report harassment.

A threatening hand grabs Arti Yadav by the shoulder. The 16-year-old escapes the hold with an elbow strike to her attacker’s head, stopping just short of contact. As quickly as the move was made, Arti’s serious face falls, and she and her friend, the “attacker,” both laugh.

There’s been no fight or disagreement. Arti and a handful of other teenage girls, dressed in tidy maroon and white uniforms, are practicing self-defense techniques at a park in their neighborhood, Madanpur Khadar. They have to be prepared in case a “teasing” incident turns physical.

Harassment is a challenge for many girls and women in Delhi, a huge city where Uber drivers navigate the same streets that cows meander freely. Families like Arti’s, who migrated from rural areas, struggle with a clash of cultural expectations and urban realities.

For her parents, Ramkrit Yadav and Lalmati Devi, migrating to Delhi 30 years ago was the first step in changing their children’s future. They’re overpowering poverty and harnessing the opportunities a city like Delhi can provide — and the change took less than a generation.

Concrete and cinderblock houses up to five stories high line narrow alleyways, including the street where Arti lives with her parents, three sisters, and younger brother. The tall buildings block out all but patches of sky, which is sometimes shrouded in thick, barely breathable air.

Ramkrit and Lalmati came to Delhi in 1986 from Azamgarh, a small city of about 111,000 people east of the capital in Uttar Pradesh state. Ramkrit’s father was a farmer whose yields weren’t enough to sustain the entire family, so the couple chose to move to India’s capital.

For 30 years, he’s worked as a master cutter at a clothing factory. On his most productive days, he earns 460 rupees (US$7).

“Parents always feel they have no support if they have no sons,” says Arti’s sister Renu, 19. “Our father is very supportive and treats us as equals.” But, she continues, “Our mother is always talking about how she has only one boy, and she’s constantly after Rinku to get her married,” because Rinku is 21.

Their parents had an arranged marriage when Ramkrit was 14 and Lalmati was 10. Though the legal age for marriage in India is 18, child marriage remains a significant problem, especially in poor families.

Their daughters, however, have traded child marriage for college textbooks. Since the siblings became involved with World Vision five years ago, they’ve slowly blossomed from shy to strong, changing their father’s perception of his daughters.

“I have seen a lot of change, positive change, in my children’s lives,” he says.

Ramkrit participated in World Vision workshops and trainings for parents, learning about the importance of education and community involvement for his children.

“I definitely want to go to college after school instead of getting married,” says Arti.

The talkative 10th grader likes studying English. She’ll likely pursue the same field of study as Renu, who is in the first year of courses toward a general bachelor of arts degree.

“Lots of girls sit at home and don’t go to school,” Renu says. Her goal, she says, is “to be a teacher — a teacher at a school and also teaching needy students out of my home.”

It’s not just cultural traditions that keep some girls in Madanpur Khadar home-bound. As teenagers and young women, Arti and her sisters face challenges of urban life every day that threaten to derail their future plans — especially unwanted harassment from boys and men.

“Boys skip school and hang around, not doing anything,” says Renu. “They comment on appearance and say derogatory terms. It’s vulgar and makes girls into objects. It affects their sense of worth.”

Two years ago, Arti and her friends Nisha and Vijeta were walking along the bank of the nearby Yamuna River, stopping periodically to draw their names in the sand. A group of boys saw them and followed the girls, taunting them by calling their names they saw written in the sand. As the situation escalated and the girls feared for their safety, they ducked into a friend’s home to get away.

Because of incidents like that, World Vision staff partnered with the Delhi police and arranged for 250 girls in the neighborhood to take self-defense courses, where they learned techniques to escape physical assault and the tools to confront and report harassment.

“On the first day, we were sore from learning the moves,” says Arti, laughing. “After doing the course, my self-confidence improved. It gives me more confidence when I’m out of the house because I know how to handle myself.”

In the years since the harassment incident, Arti and her sisters have taken control of their own lives, empowered by programs like self-defense classes, vocational training, and youth clubs. With the confidence they’ve developed, they’re helping children and teenagers in Madanpur Khadar affected by child labor, abuse, exploitation, and child marriage.

Renu’s a member of a group that monitors the neighborhood for child rights violations and advocates on behalf of children vulnerable to child labor, abuse, and trafficking. Rinku teaches sewing and craft classes to girls who aren’t in school.

Arti leads one of 32 children’s clubs in their area. Each has a different specialty, and Arti’s club, named Star Children’s Club, works with children who scavenge trash or live in the neighborhood dump.

Loads of garbage arrive several times a day, piled high atop rickshaws and tractors. It’s a place of ramshackle tin structures with tarp roofs and trash and broken glass littered on the ground — but for an hour each afternoon, Arti and her 11 fellow children’s club members transform it into something else.

Every day a handful of them walk to the dump. They teach numbers and both Hindi and English alphabets, then lead the kids in a drawing exercise to express their hopes, challenges, dreams, and issues they face. They sing songs to teach the importance of hygiene and handwashing. There are lollipops and games, laughing, and clapping.

The role Arti and her friends play with the children here is the same that World Vision staff fulfill for Arti and her family — a familiar face, reassuring presence, unwavering encouragement, and helping hand.

Her father’s face lights up when he talks about the change he’s seen in his daughters as a result of their involvement with World Vision. Before, Ramkrit says, they “didn’t have dreams, they didn’t trust. They were in this room only, these four walls. They didn’t interact with neighbors or friends. Now they can visit other places and change their thinking. They have dreams and have the confidence to take command of their own lives. They can talk with anyone. Like how a lamp brightens the darkness, the girls keep the honor of the house.”

Once afraid to leave her house lest boys harass her, Arti walks confidently into the dump for an afternoon session with the children there, empowered by her own transformation.

Now, she chooses her own path.

Photos: Members of the self-defense group pose for a photo. © 2016 World Vision/ photos by Eugene Lee