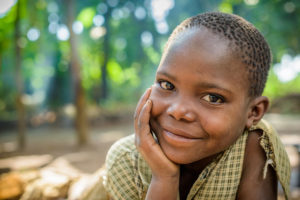 Orphan Elizabeth, 8, taken in by Josephine. Josephine Bingi, 63, moved to Hoima in 2001 after her separation from her husband, Boniface, who has since passed away. They had been married for 37 years. After the separation, things have been challenging. “It’s a hard life,” she says. “I have to bear with it.” She says of the children: “They are orphans. Their fathers and mothers died. They have to be here.” This family’s health is not good. “It affects us emotionally, physically, psychologically, and socially,” she says. “Sometimes I go out of my mind when I see these children. I don’t take them to the hospital. If I go, there is no medicine. Instead, I collect leaves.” Sometimes the children sleep in other people’s homes. “There’s not enough room,” says Josephine, who suffers from diabetes and high blood pressure. “I can’t afford medicine. I am surviving on prayer.” Malaria is a challenge. “We sleep under nets but it’s hard to stay covered. They sleep under nets on the floor, but the nets don’t cover them. They get malaria frequently. When they fall sick, there is no medicine.” Three of Josephine’s daughters died of HIV and AIDS. Now she cares for their children, plus another orphan named Elizabeth. The oldest girls struggle in school. Josephine has to make hard choices about how she spends what little income comes from the sale of banana pancakes that she makes on Sundays to sell at church. Grandson Alan does not attend school, but he wants to be a pilot. She doesn’t have enough money for Alan to attend school.

Josephine Bingi, 63
(Her husband, Boniface Ntazente, died last year of lung disease at 55)
Rosemary, oldest child, died of HIV
Maureen, 35 (doesn’t live with her)
Lydia, died of HIV
Lydia’s children (now orphans, living with Josephine):
•Saida, 16, not in school because she failed to pay her fees. She is gardening now.
•Shamim, 15, in school
•Enoch, 7
Mar