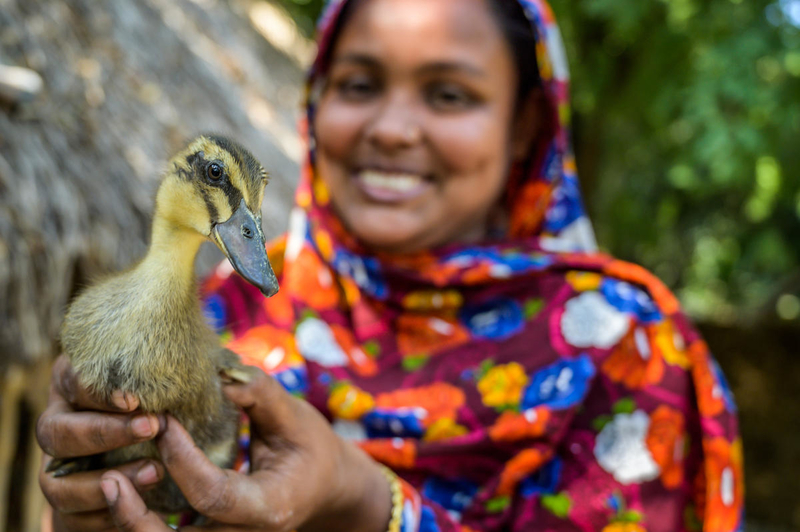 “The feeling was like a newborn baby came in the world — I felt the same when the eggs first hatched.”

In the four decades since its independence, Bangladesh has made impressive progress in growth and development. Poverty levels have fallen by a third and indicators such as life expectancy and literacy have increased.

Despite these achievements, the gains of development haven’t been even — some regions still experience high levels of vulnerability. The southwestern coastal region for example, is located literally and figuratively “in the eye of the storm”: The area is repeatedly exposed to cyclones, tidal surges, floods, and droughts. Climate change is expected to worsen the intensity and frequency of these disasters, and agricultural productivity is negatively impacted by soil salinity and waterlogging.

All of these issues aren’t good news for food security and livelihoods in southwest Bangladesh. A lack of freshwater in the region increases families’ challenges, and poor households in this area regularly struggle to afford a nutritious diet, diversify their livelihoods, and bounce back from economic adversity.

That’s why Nobo Jatra — a five-year development and food security program implemented by Word Vision and funded by USAID — is helping men and women in the area start an unexpected new enterprise: Using an incubator to hatch baby chicks and ducks!

“We feel proud to be the pioneers of these incubators,” says Kallal Roy, a student in Chunkuri Dakatia village and a member of a six-person co-op in charge of an incubator. “This is a good opportunity to be first in the area.”

The group raised money for the incubator, then went through training on how to use it. They collect chicken and duck eggs from the community, paying about 12 cents per egg. Then, 21 days later (28 for ducks), they sell the day-old chicks and ducks for about 42 cents each. And it’s working well: They’re making money.

The group is already getting orders from others in the community, and some local farm owners are contracting with them to get chickens. And best of all, this venture can be done year-round. Once their profits are big enough, the group hopes to buy a second incubator.

Rehana Begum, a local mother who’s also a member of this incubator group, is excited about this new business: “From this, we can have a handsome amount of money that we can use for our children’s education.”

“The feeling was like a newborn baby came in the world — I felt the same when the eggs first hatched,” she says.

“I was totally speechless when I saw,” says Iva, the 16-year-old daughter of another group member. Iva helps tend to the eggs while they’re in the incubator, turning them as needed and making sure the electricity is on. “We’ve gotten such nice fruits of our labor after such hard work.”

This program’s name, “Nobo Jatra,” translates to New Beginning. And that’s exactly what this unique business has been for these enterprising men and women.

Learn how World Vision and Nobo Jatra are helping girls say “No” to child marriage.

ACT NOW: Speak up for programs that help empower families in Bangladesh!

Foreign assistance — for about 1 percent of the total U.S. budget — supports programs like Nobo Jatra that empower women, promote health and nutrition, and help communities lift themselves out of poverty. Your voice helps these programs continue for families in southwest Bangladesh and all over the world!